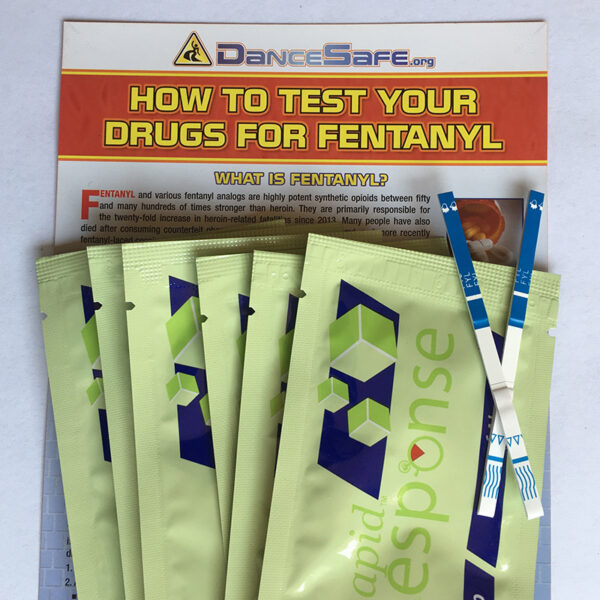 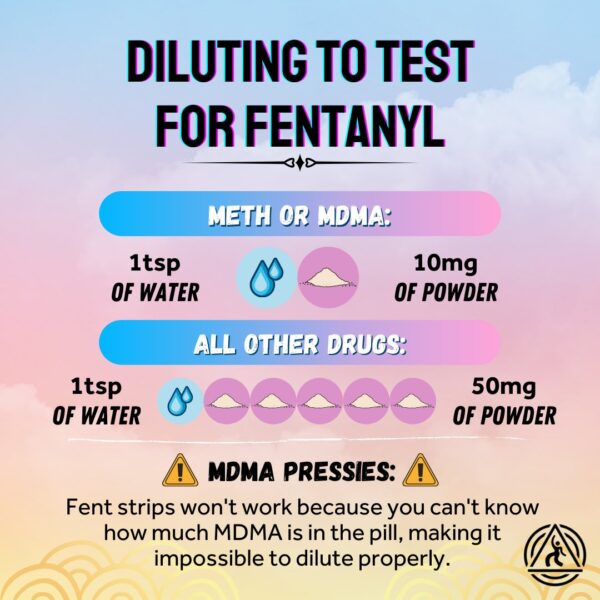 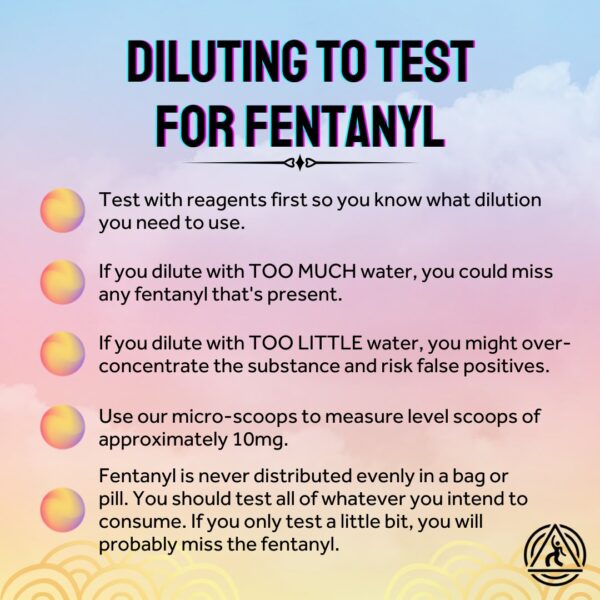 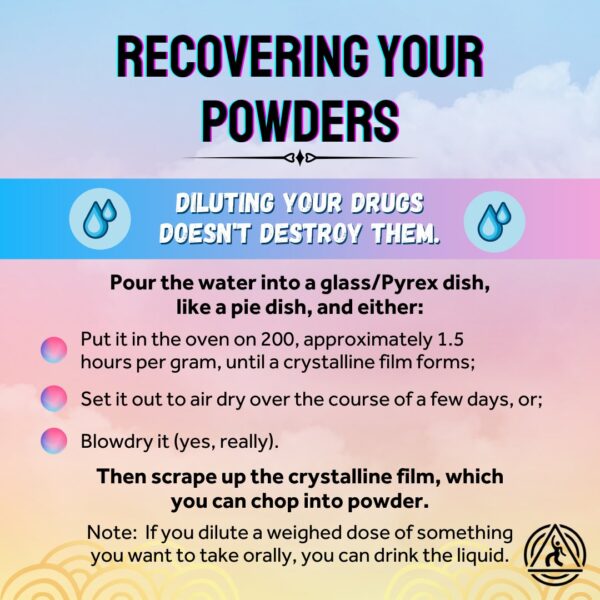 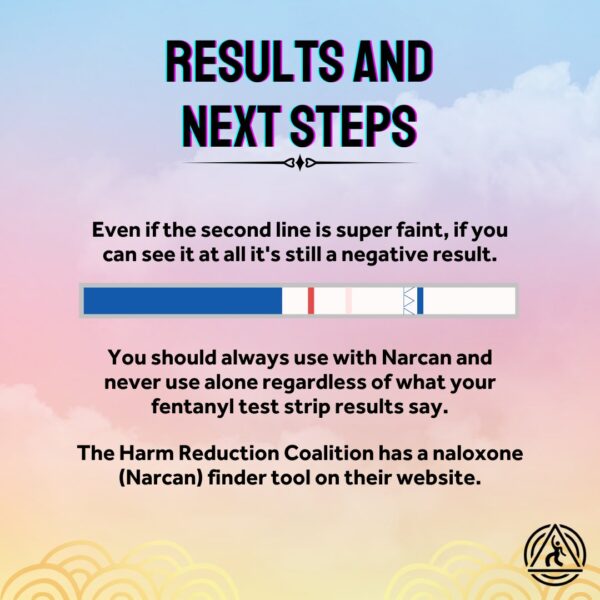 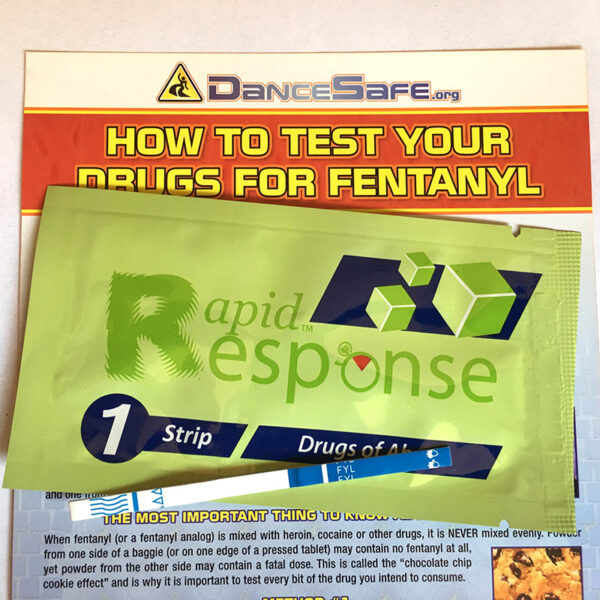 DanceSafe’s fentanyl testing strips can quickly and reliably detect the presence of fentanyl and most of its known analogs in a drug sample. Fentanyl and its analogs are highly potent synthetic opioids contaminating many drug supplies, including counterfeit pharmaceutical pills, cocaine and other drugs. Since 2013 they have killed hundreds of thousands of people in North America alone.

What is Fentanyl?
Fentanyl and various fentanyl analogs are highly potent synthetic opioids between fifty and hundreds of times stronger than heroin. Since 2013 they have killed hundreds of thousands of people in North America alone. Accidentally ingesting fentanyl-laced heroin, cocaine, meth and other drugs—including counterfeit pharmaceutical pills—is the single greatest risk facing people who use drugs today.

* Note: The term “fentanyl” refers to fentanyl itself, as well as numerous analogs such as acetyl-fentanyl, furanyl-fentanyl, carfentanil, and others. Some analogs, such as carfentanil, are so strong that a fatal dose may be invisible to the naked eye.

If used correctly, DanceSafe’s fentanyl testing strips can detect fentanyl and most of its known analogs, including carfentanil. However, they cannot detect all of them. A negative result, therefore, does not guarantee your drug sample is free from all synthetic opiods.

Our strips have been verified to positively identify the following drugs:

WARNING! Fentanyl test strips from other sources may not work the same, and some may not work at all. We conducted an independent study in conjunction with the University of California assessing a variety of strips sold on the market. Out of five different strips we tested, four could not detect carfentanil, and one set of strips from a Chinese manufacturer did not work at all!

NOTE: AS of 11/5/21, if you are testing MDMA or methamphetamine, strips with batch numbers ending in either 196 or 207 require a greater dilution. Read this post for more information.

The Most Important Thing to Know About Fentanyl

When fentanyl (or a fentanyl analog) is mixed with heroin, cocaine or other drugs, it is NEVER mixed evenly. Powder from one side of a baggie (or on the edge of a pressed tablet) may contain no fentanyl at all, yet powder from the other side may contain a fatal dose. This is called the “chocolate chip cookie effect” and is why it is important to test every bit of the drug you intend to consume!

Testing heroin and other injected drugs

If you inject heroin or other drugs, you should test every time you inject. The best method is to test the residue from your spoon or cooker.

Testing cocaine and other non-injected drugs

Method #1 – Testing Everything You Intend to Consume

The best method is to test every bit you intend to consume. This requires dissolving you entire dose in water, which means you will need to drink your dose if you decide to take it. For drugs like cocaine or meth that many people like to insufflate (snort), drinking it will still work. It will take longer to feel the effects, but they will last longer.

Method #2 – Testing the residue inside your baggie.

CAUTION! This is NOT the recommended method for testing. The best method is to test every bit you intend to consume. However, some people may not be willing to dissolve their entire dose of drugs in water every time they partake. In that case, the next best method is to test the residue stuck to the inside of the baggie the drugs came in. This method may not detect fentanyl due to the chocolate chip cookie effect, but it is better than not testing at all.

One red line on top is a POSITIVE result for the presence of fentanyl or one of its analogs. Two red lines is a NEGATIVE result. No red lines (or one red line on the bottom) means the test is invalid. (Usually this happens because the liquid did not travel far enough up the testing strip.)

Disclaimer: DanceSafe’s fentanyl test strips are provided for harm reduction use only. They cannot detect every fentanyl analog, nor can they detect other synthetic opiates. A negative test result does not mean a sample is safe to consume. No drug use is 100% safe. All drug use contains inherent risks.